McMahan Industrial Services was founded in June of 2017 by Ashley and Justin Kiger and is family-owned and operated out of Norwalk, Iowa.

Justin started his welding career over 10 years ago after attending Blong Tech trade school in Davenport, Iowa. After meeting Ashley, who is a saleswoman by trade, the two wanted a change of pace and moved to Charleston, South Carolina. There, Justin was trained and worked as an underwater diver from 2012-2015. After having two kids—Knox in 2013 followed by Eva in 2016—the Iowa natives decided it was time to head home to be closer to family.

After moving back to Iowa, Ashley and Justin’s entrepreneurial spirits became restless so they decided to open McMahan Industrial Services, LLC—using Ashley’s maiden name. Originally, operations started out of their Southside Des Moines home, but as business started to grow and they needed a larger space, they set their sights to Norwalk, Iowa.

We opened the shop in 2019 and it has been home base for storing equipment and materials as well as where custom fabrication projects take place. In order to keep up with demands on the road, we purchased a trailer in the summer of 2020 and custom fit our pipe fitting equipment to optimize the space. This allows us to be a fully mobile operation and make changes and handle situations in the field as they as come up.

McMahan is a full-service welding and mobile welding, custom fabrication, tank installation, millwright services, insulation, and pipe fitting company. From small repair jobs to larger installation projects, McMahan is equipped to handle your needs. We are locally owned and operated out of Norwalk, Iowa and serve the greater Des Moines, Sioux City, and Council Bluffs areas as well as parts of Omaha, Nebraska. Our team has the resources to travel to you and operate out of our mobile pipe fitting operation. 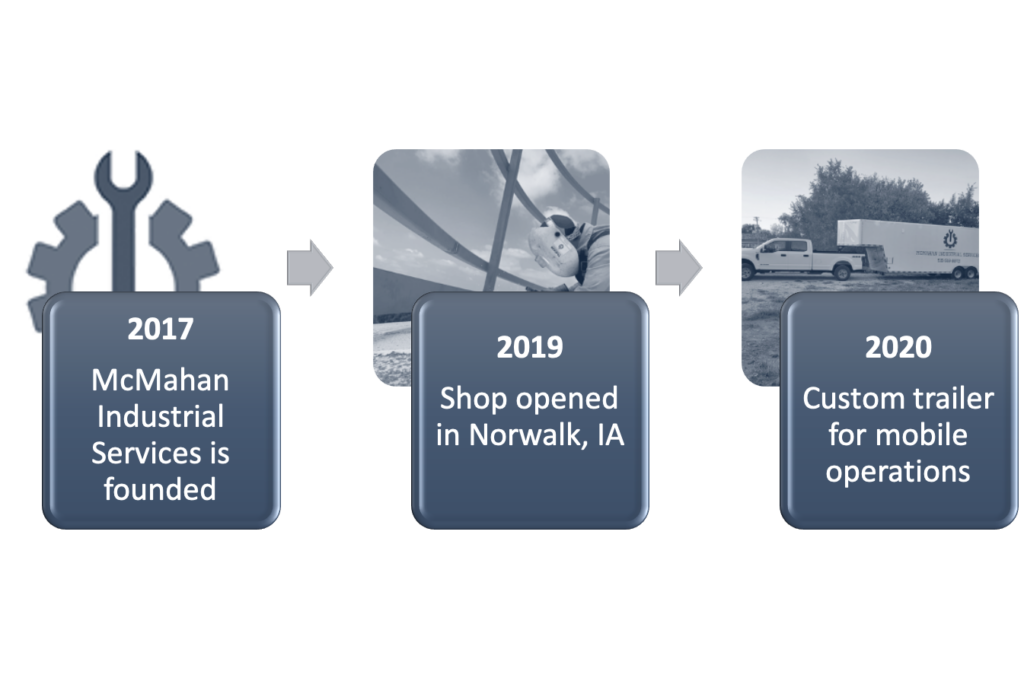 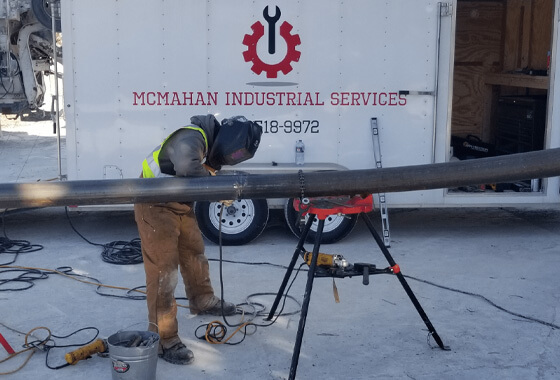 Justin Kiger
Founder & Project Manager
Training
Welding certification from Blong Tech. Certified in Mig, stick, and tig welding
Favorite Part of the Job
My favorite part of this company is the small business atmosphere. I enjoy always having a new work environment as we go from job to job
Ashley Kiger
President & Founder
Training
Graduated from Quincy University with a B.S. in Business Administration. Started in customer service and sales Moved up to management positions in sales and hotel management Previously was an Account Manager for a logistics company in the Des Moines area. Started the company with Justin in 2017.
Favorite Part of the Job:
I love being a part of the small business community. It allows us to get to know our team better as well as our customers
Louy Fazio
Welder & Millwright
Training
Jack Bell
Welder & Millwright
Training
Northland Career Center - 2 years Missouri Welding Institute - 1 year AWS sense level 1 all certifications Structural Certs 6g Pipe Certification
Favorite Part of the Job
It's great to see the work come together using everything we have to get it done.
Darryl Miller
Welder & Millwright
Training
Graduated from Central Campus and is AWS DOT certified
Favorite Part of the Job
My favorite part of the job is the brotherhood of the guys we work with